Officially established on the 8th March 1787 (earliest known Minutes record) in Ireland’s oldest city, Waterford Chamber is the leading business representative organisation in Waterford. Read more about our history in our 200th Anniversary Booklet: ‘Perceptions and Promotions. The Role of Waterford Chamber of Commerce 1787-1987’ by clicking the image below. 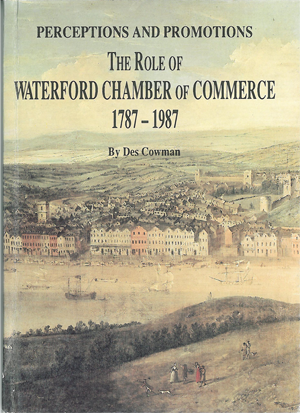 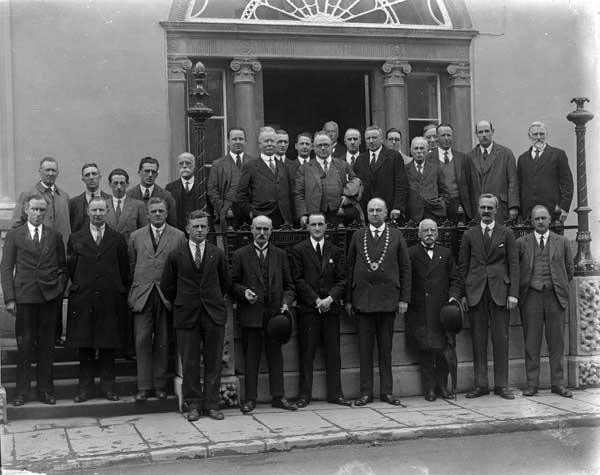 This Georgian House (dating back to 1785) is attributed to John Roberts who was a native Waterford architect and builder. He made the most significant contribution to Waterford’s architecture in the Eighteenth Century. He transformed the medieval city of Waterford into a European city. He was influenced by the works of Inigo Jones, Christopher Wren and James Gibbs. His local works include the Bishop’s Palace, the former City & County Infirmary – the Leper Hospital, City Hall on The Mall, mansions for the local gentry, the forecourt of Curraghmore House, Newtown House, Faithlegg House and Mount Congreve House. Roberts, a member of the Church of Ireland, built both the protestant Christ Church Cathedral in 1773, which is the only Neo-Classical Cathedral in Ireland and the Roman Catholic Cathedral of the Most Holy Trinity in 1796.

The Roman Catholic Cathedral was the first post-Reformation Catholic Cathedral in Ireland. With his wife, Mary Susanna Sautelle, the daughter of a Huguenot (a group of French exiled protestants – credited with introducing the famous Waterford Blaa) he had twenty four (eight of whom survived to adulthood) children. He was enormously respected by his workforce who nicknamed him “Honest John Roberts”. Roberts died on 23rd May 1796. He is buried in the French Church in the nearby Greyfriars.

History of the Morris House

Roberts’ finest secular creation is undoubtedly this building, the Morris House. This building is regarded as one of the most important heritage building in Waterford City and is a protected structure. The house was built for William Morris of Rossduff, Woodstown, whose ancestors had been Cromwellian adventurers. The built cost was £10,000 circa 1795. However, William Morris never lived to see it completed.

In 1813 his sons sold it for a mere £2,500 to Waterford Chamber of Commerce, which was just about to be formed from the Body of Merchants. Its four stories plus basement and loft were too much for their needs. In 1816 the ground floor of the building was leased to the Harbour Commissioners. 1816 was very much the age of sail and Waterford had a riving port. The gracious, spacious and lofty rooms reflected the style and ambitions of these Waterford merchants. These two bodies occupied and managed the building between them for most of the next two centuries.

In the 1830s and 40s the upper floors of the building also functioned as a hotel. After 188 years in 2004, the Waterford Harbour Commissioners, now known as the Port of Waterford Company vacated the building.

The first floor still houses Waterford Chamber of Commerce. While various business tenants have come and gone over the years – existing French restaurant, La Bohème have occupied the vaulted basement since 2006. The Parlour Vintage Tea Rooms opened on the ground floor in December 2015.

Structure of the Building

This building exemplifies the work of an extremely confident designer in tandem with the finest of craftsman. It retains its original form and character. Care of this building has been a tradition of its history. It is grand in proportion. It consists of a six bay façade and four storeys over a basement. It has a beautiful wide Doric doorcare with sidelights and decorative fanlight.

The basement has intact groin vaulting. It is constructed primarily of rubble stonework but evidence suggests that brick was used in the interior. The exterior was originally of brick but the façade was rendered circa 1885. The original granite plinth, doorcase, cut-granite quoins (masonry blocks) and cornice (ledge) remain. The flagging to the entrance steps, service stairs and internal landings are of granite.

The building is topped by a moulded stone cornice with granite frieze to the eaves and parapet. John Roberts made use of the golden section to ensure that the original proportions of the front façade were harmonious and balanced. The main entrance is the most prominent element. Alterations took place to the front façade in the late Nineteenth Century. The front cast-iron paneled railings and limestone piers also date from this period.

The windows were embellished by adding decorative aediculae and architraves, and the sills were extended to accommodate them. The style is late Victorian with touches of Art Nouveau. In raising pedimented aediculae well above the original façade line, the Victorians altered Roberts’ proportions. The original glass of the timber sash windows surprisingly survived. Thus, the façade has kept its predominantly Georgian look.

Interior of the Building

The internal layout of the building is basically Palladian. The entrance hall has a portal of twin fluted Doric columns and an entablature. Four doors (ground floor), one in each corner allow access to the rooms and an entrance to the stairwell. It has one of the finest intact series of Eighteenth Century rooms in Ireland. Original fireplaces remain. The first floor or piano nobile has a series of magnificent reception rooms.

The impressive cantilevered spiral staircase is unique and one of the finest in the country. The staircase has interlocking timber steps, brass balustrades and rich plasterwork. The lofty stairwell is surmounted by an oval dome and lit by a skylight. The interior of the Morris House is noted for its very fine Neo-classical plasterwork of Patrick Osborne and its richness of decoration. The main reception rooms of the ground floor, the elliptical staircare and the piano nobile have been decorated mainly in low relief Neo-classical style. The entrance hall has decorated columns and features a beautiful frieze with winged horses, urns and swags. The ceiling has a fan effect centerpiece with swags and foliage surrounds.

Stucco (fine plaster) work in the Adam style also features in the ground and first floor rooms. The friezes are decorated with elegant classical motifs, figurative medallions, urns, anthemion and palmette mouldings. The elegant stairwell is embellished with exuberant plasterwork, and the wall decoration follows through onto the ceiling without a break. Delicate friezes of flowers and deers adorn the stairwell at first floor level. Looking up to the skylit dome itself one sees exquisite plasterwork in high relief of flora and fauna, garlands, mucical trophies and elaborate chinoiserie birds. This is one of the most elegant staircases in Ireland and reminiscent of the Rococo period.

Manage Cookie Consent
To provide the best experiences, we use technologies like cookies to store and/or access device information. Consenting to these technologies will allow us to process data such as browsing behaviour or unique IDs on this site. Not consenting or withdrawing consent, may adversely affect certain features and functions.
Manage options Manage services Manage vendors Read more about these purposes
View preferences
{title} {title} {title}